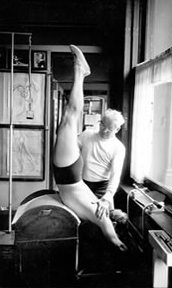 Joseph Pilates was born in Germany in 1880. As a sick, young boy, he became fascinated with anatomy, divouring anatomy books cover to cover. He would study the movement of animals in the forest and through his studies, he had become so healthy and strong that he was modeling for anatomy books at the age of 13.

His passion for anatomy and the physical body lead him to become an accomplished gymnast, boxer, diver and skiier. He also practiced yoga, self-defense and wrestled, among other disciplines. His exercises were greatly influenced by his many physical activities.

In World War II, Joseph helped rehabilitate wounded soldiers back to health and it was then that he began creating his work, then known as "Contrology". After the war, Joseph and his wife, Clara, left Germany and moved to New York City where they opened the very first Pilates studio.

After a terrible fire in 1966, Joseph Pilates died in 1967 at the age of 84. His wife continued to run the studio until she passed away ten years later.

Joseph was a big believer in enjoying everything life has to offer. Though he paid great attention to the health of his body, he also enjoyed his scotch and cigar on occassion. He is a great reminder that life is about balance and Pilates is the perfect discipline to balance the stresses of living in today's world.

"Physical fitness is the first requisite of happiness.﻿"   - Joseph Pilates